Who said that Ragdoll is an easy breed to select?  It’s not !!

Let’s start with something “simple”… the pattern…

Ragdolls is one of the few breeds in which pattern is important and should be selected. Color and Pattern give you 20 points on a cat, which is really a big percentage

Many breeders will tell you they do not care about pattern and they select just for type… they will take out of their hats the “oh-my-so-boring” sentence… “ first you have to build the house than you can paint it!!”

I wish I could answer…. “ Hey it is already 10 years your house is built… when do you want to start painting ??”

I think this sentence that at first can seem smart, at the end it just hides the fact that people do not know how to paint…

Now in Ragdolls pattern IS IMPORTANT ! If you do not want to paint, than breed Maine Coon or Norvegian Forest Cats or British or anything else…. But in Ragdolls you need to build AND paint !!

So how do we paint ?

To be able to answer, we need to understand how the White Spotting Gene (WSG) works.

The White Spotting Gene is a funny gene that function like a light switch in a room.

The switch controls the light bulbs in the room, switching them ON and OFF. Let’s see in detail how these switch function.

As you might know, Ragdolls exists in different patterns, depending the amount of white they have.

There is the Colorpoint Ragdoll with no white. For simplicity we will give to this pattern the White Color Value 0.

Here an example of it. 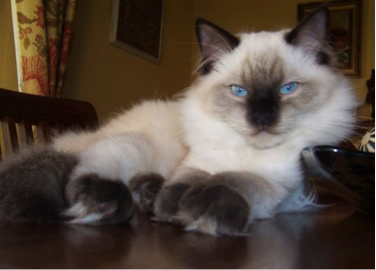 Here an example of it. 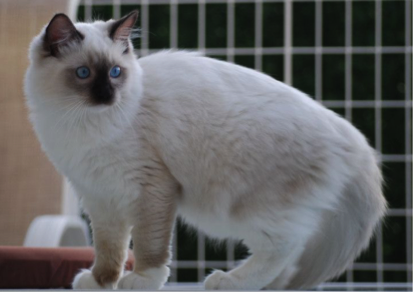 There is also the Bicolor pattern in which there is much more white. In this pattern the entire front and back legs are white, belly is completely white and the low part of the muzzle is also white and has the shape of an inverted V on the head of the cat. For simplicity we will give the White Color Value 4.

Here an example of it

But there are also 2 other patterns that have much more white than Bicolor: the Mid-High-White and the Van (or High-White) pattern. The Van pattern usually presents just colored ears and tail and the rest of the body is white. And the Mid-High White has usually an amount of white in between Van and Bicolor. For simplicity we will give the White Color Value of 6 to Mid High-White and the White Color Value of 8 to Van.

The light switches of the colorpoint are all in the position OFF, the room is dark, there is no light in the room, and this is a recessive condition. We write down that this cat is genetically ss, small letters as this trait is recessive and no numbers because the white value is 0.

As soon as the switches are turned ON there will be light in the room.

But how much light ?

It depends on the number of switches!

In mitted cats there are 2 switches ON coming from one parents and the rest of the switches are OFF coming from the other parent. We write down that this cat is genetically S2s, a small s from one parent and a capital S (as the trait is dominant) and the number 2, which is the white value. 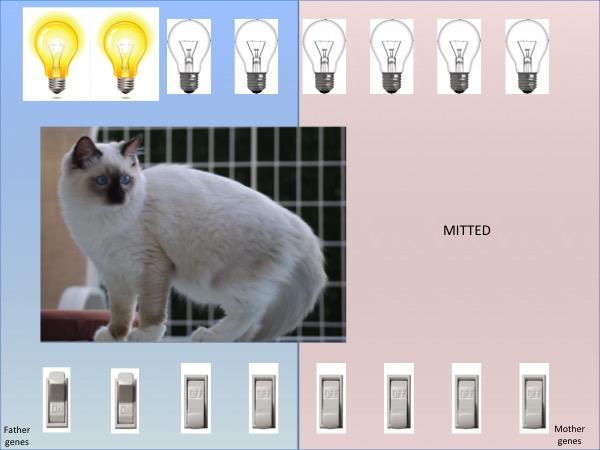 In bicolors there are 4 switches ON

Now there are two possibilities in this case: either the 4 switches ON come from just one parent (these cats are commonly called “true” bicolors) or the cat has inherited 2 switches ON from both parents giving a cumulative white value of 4 (these cats are commonly called High-Mitted). These two cats have theoretically the same amount of white, although genetically they are not the same. We write down the genotype S4s for “true” bicolors and S2S2 for High-Mitted. 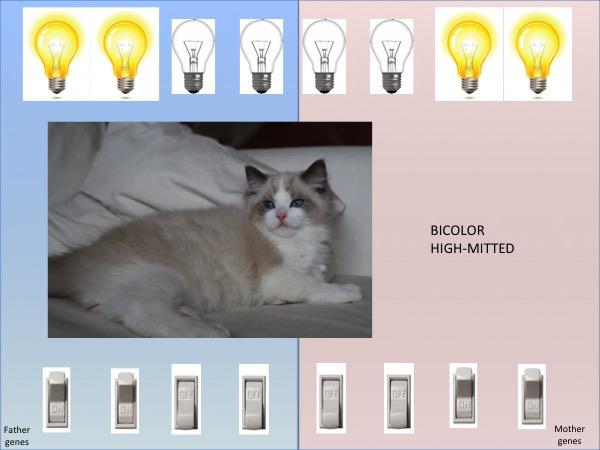 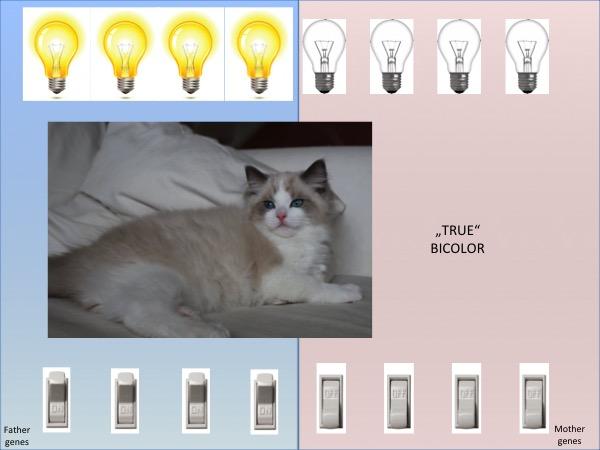 We will speak in details about these two genetically different bicolors later in another section.

In mid-high white there are 6 switches ON. This situation happens when a parent has an S4 gene and the other parent has a S2 gene. Both together they will give a cat that genotipically is S4S2 which a cumulative white value of 6. 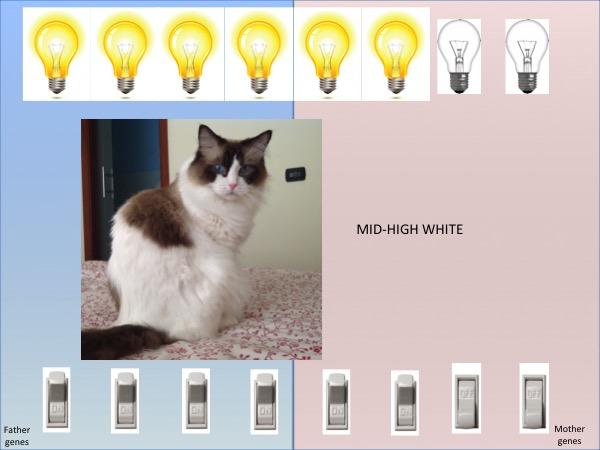 In van there are 8 switches ON. Of course that is the maximum white possible from the WSG and obviously it comes the 8 switches ON come from both parents (4 each).

In general, the more switches there are, the lighter the room will be.

But Take Care… I said “In general” as there is another factor that control how much light there is in a room… THE LIGHT BULB!! And that is the point that many people forget about the White Spotting Gene…. This gene does not work alone!!

Everybody have experienced the fact that a cat… ouppsss a room in which there are just 2 switches ON (a mitted cat) can be lighter or darker than another room with the same number of switches ON.

When we translate into cat-terms… the mitted cat has more or less white… it is what we call a maximal white (the white of the mittens and boots goes higher, the belly white line is bigger) or a minimal white (partially colored chin, very tiny mittens and small boots and a very narrow white belly line sometimes even not completely white).

These slight differences of white depend on the Power of the light bulb… in a certain sense “The Watt!!”

Why the WSG gives these differences…. Well there are two possibilities that are the most biologically probable…. (Sorry, I need to be a it more technical here)

Or better in my opinion (more plausible at a molecular level)

So things get really complicated… there are switches and light bulbs and just the combination of the two will give us the phenotype of the cat.

If you have understood this concept, probably now you have that “Eureka moment” in which it is very clear why there are some mitted or bicolor Ragdolls with more white than others (their light bulbs have more Watt, as simple as that!).

An extreme example would be a mitted that has the same amount of white as a bicolor (there are many around), genetically they are Mitted but phenotypically they look like a bicolor, just simply because they have two very powerful light bulbs.

This characteristic is completely inheritable, so mitted bicolors tends to have more mitted-bicolor kittens.

Here an example of how Watts modulate the light in the room… for mitted cats. 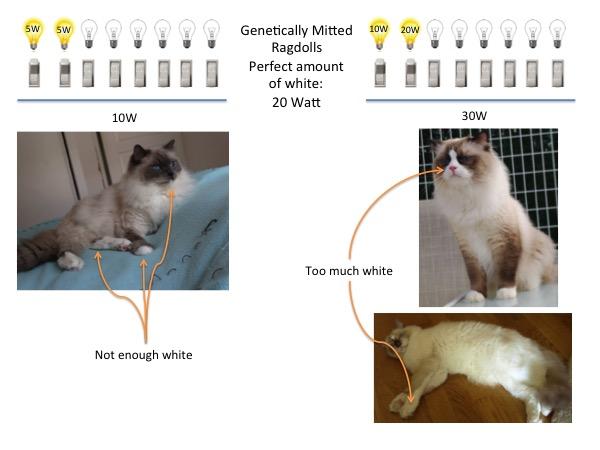 What can I do to improve the amount of white in my kittens?

If you have now followed the reasoning the only possible answer is COMPENSATION!

A cat with minimal white should be crossed with a cat with maximal white. But you need to know which power the light bulbs have to start with… For example… you have a female with a very large (too large V), you will choose for her a male with a slightly narrow V… to get a perfect balanced V!! Of course not all kittens will be perfect, but you have much more chances to get a balanced V if you choose a compensating partner. That is the base of selection! 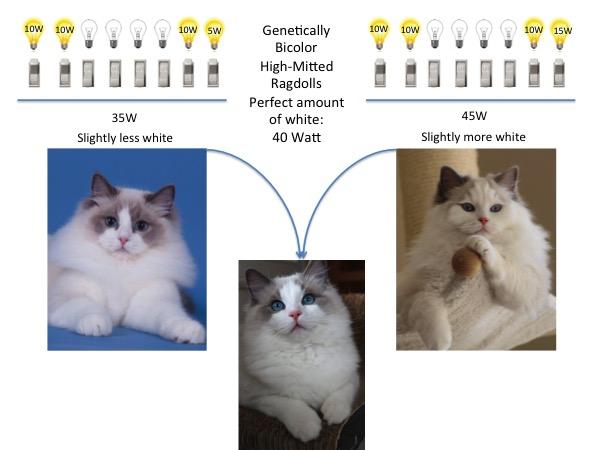 And believe me…  it works!!

What about using a colorpoint to control the white level?

A colorpoint cat is a “dark room” … light bulbs are there but because switches are OFF you will not know how many Watts are the light bulbs. If you do not know the lines behind this colorpoint cat and have no idea on how much white they had the parents (I mean how much Watts !!) it is a bit a lottery to use that cat.

Of course when you use a colorpoint cat with a Van or a Mid-High White, you will have LESS white but just because you reduce the number of switches… not because you control the power of the light bulbs.

So, unless you really know very well the lines behind a colorpoint I would not advice to use this type of pattern to work to modulate the white.

A practical example : a very good friend of mine had a colorpoint female that she matched twice with 2 Bicolor High Mitted boys with a perfectly balanced white…. From these marriages she got all mitted kittens of course but she had 90% of kittens with very big blazes and clearly too much white…. The two males used they were not in cause has they have been mated with other females (also colorpoint) and never gave these mistakes…

Looking back at cats from the line of this queen, we found out many cats with way too much white and mitted cats with very big blazes as well…. That means that this colorpoint queen was carrying very powerful light bulbs but because the switches were OFF, we could not know this!!

OK now I expect many reactions from the reader….

“Eureka!! I have understood”

Whatever your reaction is, the take-home message is: Ragdoll is a breed in which we should work the white and it is possible in a rational way to work and select it….

So… who wants to start painting now??